The 858 Fantom is a decisive step in this development, in which the well-known design team of Gerald Kiska came into play. The fact that a lot of experience from the automotive industry comes into play is evident at first glance in the cleanly modeled boat with the very harmonious interplay of exciting surfaces and lines. Yacht designer Harry Miesbauer did an excellent job with the underwater ship, as the handling during test drives showed. Despite the impressive appearance, the road transport of the 8.67-metre-long vehicle can still be done by yourself, because with a width of only 2.49 metres and a curb weight of 2.5 tonnes, the 858 Fantom can be easily trailered with suitable towing vehicles.

The central living space is the cockpit with a teak floor covering, which is part of the standard equipment. On the comfortable rear bench seat, three adults can settle comfortably, which is also ideally positioned there. In the front area of the cockpit, the solid and well-padded seats for the driver and front passenger are mounted, which can also be used as a standing seat with the best lateral support, or can simply be turned backwards for a cozy get-together. If you want, you can sunbathe aft on a lying surface of almost two meters in length and a width between 1.32 and 1.50 meters, otherwise a fold-out Bimini provides shade. Cool down? The Fantom offers a 1.95 meter wide and 96 centimeter deep bathing platform, which is made of solid teak wood, whereby a three-stage bathing ladder made of the same precious wood facilitates entry and exit into the refreshing water.

The anchor installation with electric winch in the bow can be operated directly from the cockpit and does not require any gymnastic exercises.

If you are looking for some peace and quiet, you can go to the cozy cabin under the foredeck. With a maximum headroom of 1.28 meters, it is suitable as a seat for up to five people, who can easily be accommodated on the side benches. It is also possible to lie down on the 2.20 meter long and up to 1.60 meter wide, V-shaped lying surface, which offers enough space for two people.

If the lever is on the table, the glide is achieved after only four seconds at 15.5 knots and 2300 revolutions. Only 15 seconds pass until the top speed of 45 knots is reached from a standstill. The most economical way to move the boat is at 2500 rpm. Here you glide through the sea at just under 18 knots with an hourly consumption of 35 liters. If you want to reach your destination a little faster with just under 25 knots at 3000 rpm, you can drive with 1.97 instead of 1.95 liters per nautical mile but similarly economically and come with the 370-liter tank with 15 percent reserve on ranges of around 160 nautical miles. Full-throttle artists, on the other hand, have to plan the next refueling stop after just under 100 nautical miles.

During the test drives off the coast of Mallorca, there was also the opportunity to test the boat in stately waves of up to two meters. The Frauscher 858 Fantom showed exemplary behaviour with soft immersion in the wave and excellent straight-line running. Despite the fast ride, there was no splashing water in the cockpit. Even the foredeck remained dry. Even in harsher conditions, the crew always feels safe. Trimming is only necessary to a small extent. This is due to Miesbauer, who has refined his craft as a yacht designer at the luxury forges of Brenta and Wally. Cornering is child's play thanks to the smooth hydraulic steering.Manoeuvring in the harbour was problem-free.

The Frauscher 858 Fantom is without a doubt a very special boat that will not be able to hang itself on the jetty. 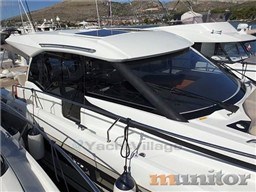 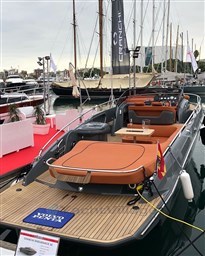 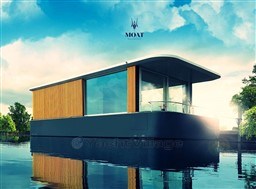